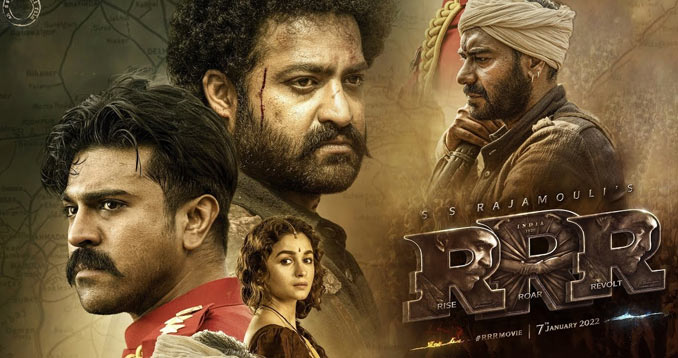 RRR  is a fantastical Telugu-language dramatic film directed by S. S. Rajamouli who wrote the film with V. Vijayendra Prasad released in March 2022 and on Netflix in May 2022 dubbed in Hindi with English subtitles.

The film stars N. T. Rama Rao Jr. and Ram Charan who are both renowned in are Telegu cinema and Alia Bhatt and Ajay Devgn who are renowned in the bollywood world of hindi cinema. Rajamouli who also directed the Bahubali films, has blended both Telegu film style with a flavor of bollywood which has become a crossover success on Netflix making top ten charts of film reviews.

It is a fictional story about two real-life Indian revolutionaries, Alluri Sitarama Raju (Charan) and Komaram Bheem (Rama Rao), and their fight against the British rule in India. Set in 1920, the plot explores the undocumented period in their lives when both the revolutionaries chose to go into oblivion before they began the fight for their country. The film, which really shows the brutality of the British occupation, comes out at as India, Pakistan and Bangladesh mark their independence from British rule.

This is a well knitted film with all the elements that make a great film. The acting in brilliant with the two main stars from telugu cinema with a lot of action stunts which require more than just acting. It is a director that makes these actors shine. Alia Bhatt’s performance is compelling after her recent great successful portrayal of the mafia madam Gungubhai Kathiawardi. Ajay Devgan’s, special appearance, just as in his recent special appearance in Gungubhai Kathiawadi, really gives this historical period drama that classical bollywood feel.

Rajamouli came across stories about the lives of Rama Raju and Bheem and connected the coincidences between them, imagining what would have happened had they met, and been friends. The film was formally announced in March 2018. Principal photography of the film began in November 2018 in Hyderabad which continued until August 2021, owing to delays caused by the COVID-19 pandemic.The film was shot extensively across India, with a few sequences in the Ukarine (before the war) and Bulgaria.

The soundtrack and background score is composed by M. M. Keeravani who is a rising music composer in South Indian cinema and also did the music for Bahubali 2. The cinematography by K. K. Senthil Kumar is simply brilliant. It really brings this action film alive making grip your sofa.The visual effects supervised by V. Srinivas Mohan and weaved together by editor A. Sreekar Prasad to make this Rajamouli thriller Rise, Roar and Revolt which is what RRR stands for.

RRR is the most expensive Indian film at the time of its release. The film was initially scheduled for theatrical release on 30 July 2020, which was deferred multiple times due to production delays and the pandemic. RRR was released theatrically on 25 March 2022, and opened to positive reviews from critics with praise for the performances, particularly Rama Rao and Charan, and screenplay by Rajamouli. RRR broke the record for the highest opening-day collection earned by an Indian film. RRR emerged as the highest-grossing film in its home market of Andhra Pradesh and Telangana, surpassing Rajamouli’s previous film Baahubali 2.